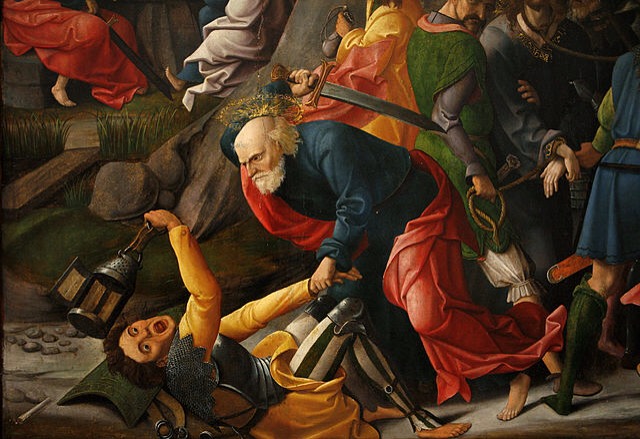 3 For though we walk in the flesh, we are not waging war according to the flesh. 4 For the weapons of our warfare are not of the flesh but have divine power to destroy strongholds. 5 We destroy arguments and every lofty opinion raised against the knowledge of God, and take every thought captive to obey Christ, 6 being ready to punish every disobedience, when your obedience is complete. – 2 Corinthians 10:3-6 (ESV)

Malchus didn’t deserve it.  It wasn’t his fault he was the slave of the high priest.  He can’t be blamed for encountering Jesus’ hot headed disciple Peter.  He probably didn’t sign up to sacrifice his ear for the good of the order.

And when the Roman soldiers came to arrest Jesus as He prayed in the garden, Peter decided the right thing to do was to get in touch with his inner Erroll Flynn, swashbuckling Malchus’ ear clean from his skull.

Peter was ready to battle on the Lord’s behalf.

How did Jesus – the One being wrongly arrested – respond?

He didn’t thank Peter.  No high fives or thumbs up.  Instead Jesus rebuked His disciple, ordering him to sheath his sword.  Then He healed Malchus’ ear.

But, instead of getting mad and grumbling and yelling, why not take a stand for Christ and His way of doing things?  When we stand up against our enemies and belittle or slander them, are we any better?  Even if we are right, are we not called to love our enemies?  Do we think God is so weak that He needs us to defend Him against those who oppose Him?

We are called to be disciples – followers / students / replicators of Christ.  There were times when Jesus was very blunt with the religious Pharisees, but when it came to pagan Romans, Christ didn’t engage them in arguments.

Consider the Roman centurion who approached Jesus in Cana (see John 4:46-53).  Jesus didn’t give the Roman theological reasoning for why He was the Son of God. He didn’t show the centurion the error of his Pagan ways.  He met a need.  He healed the man’s son from about 23 miles away – a day’s walk in Jesus’ time.

The Roman centurion came to faith in Christ not through crafty arguments or cutting debate skills.  Jesus was his only hope, and he knew it.  He came to Christ, and the Lord mercifully, lovingly, received him.

Yes, there is a difference here between the Roman centurion and those who attack Christianity today.  The Roman was desperate for help and needed someone to save His son.  Those who stand against think they can handle it all on their own.

Sometimes a person has to come to the end of his rope before he seeks Jesus.  It is in the darkest of times that we crave the light so deeply.  And, for those who seek the Lord, He is always there.  Never early.  Never late.

Instead of opposing our enemies, love them.  Feed them.  Give them your other cheek.  Pray for them.  Do not speak ill of them.  None of us has any idea of what lies ahead, and how God will use those circumstances to reach us.

Don’t follow the easy path.  Stand up for Christ by loving others.  Even / especially our enemies.