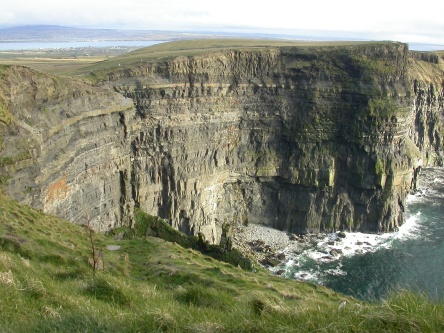 We’ve all seen the scene.  The bad guys are chasing the good guys across the desert.  Or through the forest.  Or around a winding mountain.

The chase is getting heated.  Hearts are pounding.  Brows sweating.  Running for their lives.

They are running at top speed, the land flat ahead of them. And, all of a sudden…

A precipice.  A tall cliff.

They are at the edge peering down.  I’m getting vertigo just thinking about it.  This particular scenario never ended well for Wile E. Coyote.  It didn’t do much for Thelma and Louise either.

The bad guys are coming.  You are sandwiched between your foe and a very steep vertical drop.  Your mind is racing.  Your heart is pounding.  You’re sweating profusely.  Panic seizes your senses.  Oh no!  What do you do, what do you do…

There it is folks.  That is anxiety in a nutshell.  The feeling of fear – sometimes sheer terror – that makes rational thought very difficult (if not impossible).  The feeling of anxiety has to be close to a negative version of the exhilaration an extreme sports junky experiences before the big bungee jump.  It’s an adrenaline rush without the fun.  You just feel like your falling off a cliff.

A person who experiences such anxiety often ends up hanging out with it’s even worse cousin: depression.  After all, that supply of adrenaline ain’t gonna last forever.  You have to crash sometime.

It messes with every aspect of your life.

However, while anxiety and depression are difficult – perhaps the most difficult situation many ever face – that doesn’t mean your situation is hopeless.

The believers in Philippi had plenty of reason to feel anxious.  They were Christians.  And being a Christian was illegal in Roman Empire.  Plus, Philippi was a place of military importance and considerable commercial wealth.  It wasn’t some backwater colony that barely blipped on Rome’s radar.  It would make sense that Philippi would not be a place to be viewed as an enemy of Rome.

In his letter to the Philippian church, the apostle Paul encourages the believers there to “stand firm in the Lord” (Phil. 4:1, ESV).  And, on his first visit to the city, Paul left the church with a vivid illustration of what that looks like.

Acts 16 tells us the story of Paul and Silas’ first trip to Philippi.  And the hot water they managed to get themselves into:

16 As we were going to the place of prayer, we were met by a slave girl who had a spirit of divination and brought her owners much gain by fortune-telling. 17 She followed Paul and us, crying out, “These men are servants of the Most High God, who proclaim to you the way of salvation.” 18 And this she kept doing for many days. Paul, having become greatly annoyed, turned and said to the spirit, “I command you in the name of Jesus Christ to come out of her.” And it came out that very hour. – Acts 16:16-18 (ESV)

So far, so good… right?  Fortune-telling girl follows the apostle around town, mockingly announcing their presence to all of the city. Paul gets fed up and drives the evil spirit from her.

But not everyone was happy about the slave girl’s new found freedom in Christ:

19 But when her owners saw that their hope of gain was gone, they seized Paul and Silas and dragged them into the marketplace before the rulers. 20 And when they had brought them to the magistrates, they said, “These men are Jews, and they are disturbing our city. 21 They advocate customs that are not lawful for us as Romans to accept or practice.” 22 The crowd joined in attacking them, and the magistrates tore the garments off them and gave orders to beat them with rods. 23 And when they had inflicted many blows upon them, they threw them into prison, ordering the jailer to keep them safely. 24 Having received this order, he put them into the inner prison and fastened their feet in the stocks. – Acts 16:19-24 (ESV)

Never mess with a man’s paycheck.

The situation looks hopeless.  Paul and Silas are shackled deep inside a prison, far from home in distant Philippi.  Now what?  Read on…

25  About midnight Paul and Silas were praying and singing hymns to God, and the prisoners were listening to them, 26 and suddenly there was a great earthquake, so that the foundations of the prison were shaken. And immediately all the doors were opened, and everyone’s bonds were unfastened. 27 When the jailer woke and saw that the prison doors were open, he drew his sword and was about to kill himself, supposing that the prisoners had escaped. 28 But Paul cried with a loud voice, “Do not harm yourself, for we are all here.” 29 And the jailer called for lights and rushed in, and trembling with fear he fell down before Paul and Silas. 30 Then he brought them out and said, “Sirs, what must I do to be saved?” 31 And they said, “Believe in the Lord Jesus, and you will be saved, you and your household.” 32 And they spoke the word of the Lord to him and to all who were in his house. 33 And he took them the same hour of the night and washed their wounds; and he was baptized at once, he and all his family. 34 Then he brought them up into his house and set food before them. And he rejoiced along with his entire household that he had believed in God. – Acts 16:25-34 (ESV)

There are some things we need to note here.  Paul and Silas were facing the impossible.  They were in a very bad place.  But, take a look:

Now, if you want an example of boldness, go read Acts 16:35-40.  There you will find absolutely brazen boldness exhibited through faith in God through Jesus Christ.

Today’s lesson in all of this: be bold.  Be strong in the Lord.  Have courage.  Your situation is not merely what you perceive.  Your pursuing enemies aren’t as strong as you think.  And you are not about to get shoved over a cliff.